Toronto: From Ratastrophe to Ratpocalypse. Canadian Rat stats and more 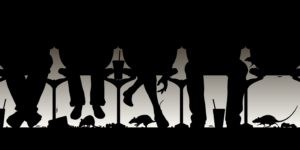 Toronto, as the #1 rattiest city in Ontario, has a growing rat infestation with no signs of slowing down.  Experts say it is because of warming trends in the weather the last few years along with there being a lot of construction sites are contributing factors.

According to  Daniel Mackie of GreenLeaf Pest Control in an interview with the Toronto PressReader, in an article posted in June of this year, Mackie states that calls regarding rat infestations have gone up 25 to 30 percent in 2017.  Mackie also suggests that a control strategy is needed, referring to the province of Alberta’s “war on rats” that has been ongoing for the last 50 years using a combination of public education regarding how to identify Norway rats, cooperation of farmers in eliminating food sources for the rats, and the use of arsenic and Warfarin. Alberta had to discontinue the use of arsenic in the late 1950’s as the collateral damage from using it included wildlife, so now Warfarin is the primary weapon used.  Avery Addison, of Addison Pest Control in Toronto  agrees with Mackie.  His company has seen 10 times more calls this year than in past years.  The CBC article continues:

“Addison said warmer conditions mean the rats have more time to find food, eat and reproduce. “The extreme cold can kill them off.” He said construction projects can displace large numbers of rats, particularly if an old building that contains a rat population is torn down. He said the Union Station renovation, for example, dispersed “huge numbers” into the city.”

The Toronto Sun goes further with a horrifying anecdote that shows how formidable and challenging getting rid of a single rat can be:

“But Toronto, with myriad rivers and ravines, has always been heaven for rats. Some are legendary, such as Oscar, an ugly 15-incher in a Rexdale warehouse.  An exterminator I know, Ed “Bugs” Bandurka, tried everything to off Oscar—even melon bait and a pellet gun—to no avail. Eventually, warehouse staff cornered the beast in a garbage bin and clubbed him to death.  Oscar was Ed’s toughest foe—but not his biggest.  “Jumbo,” rat king of an Etobicoke truck yard, was the size of a groundhog.”

Currently, Toronto city officials don’t track the numbers of rats.  The city does, however, outline prevention strategies to discourage rats from infesting homes and businesses on their web page, with traps being their number one recommendation over poisons or rat bait in order to protect children, pets, birds and wildlife, along with cleaning up droppings and making sure trash is deposited in sealed trash containers.

That’s a lot of rats to outsmart and eradicate.  And it’s necessary to eradicate them because the facts are, tunneling rats weaken the foundations of buildings and houses, spread diseases, and pose a public health risk.

Orkin Pest Control Company of Canada recently released its “Rattiest Cities in Canada.”  They are, as follows:

In British Columbia, Orkin finds the rattiest cities are:

The rattiest cities ranking is based on all rodent treatments by Orkin Canada at residential and commercial properties within Ontario from January 1, 2016 to December 31, 2016.

2 thoughts on “Toronto: From Ratastrophe to Ratpocalypse. Canadian Rat stats and more”