We’ve talked a little bit about how smart rats are, but in this article, we’re going to go full throttle and really dig into how smart these little critters are, highlighting why they are formidable adversaries.

Rats have been savvy enough for hundreds of years to survive everything from the eruption of Mt. Vesuvius that buried Pompeii to surviving the thermonuclear testing at Eniwetok Atoll in the 1940’s and 1950’s.  They’re going to be around as long as humans are around to feed them, and in this article, we’re going to show you why.

First of all, you should know that rats and humans have more similarities than differences.  We’re both mammals and give birth to living young. Rats and humans often suffer from the same diseases.  That’s because we have similar physiology, similar organs and similar body plans. Insofar as brains go, neuroscientists are finding out that rat’s brains are very similar to our own, particularly the sensorimotor cortex.  Penn State News explains:

“You have to take into account the animal’s natural behaviors to best understand how its brain is structured for sensory and motor processing,” said Jared Smith, graduate student in the Huck Institutes’ neuroscience program and the first author of the paper. “For primates like us, that means a strong reliance on visual information from the eyes, but for rats it’s more about the somatosensory inputs from their whiskers.”

In fact, nearly a third of the rat’s sensorimotor cortex is devoted to processing whisker-related information, even though the whiskers’ occupy only one-third of one percent of the rat’s total body surface. In humans, nearly 40 percent of the entire cortex is devoted to processing visual information even though the eyes occupy a very tiny portion of our body’s surface.”

What Rats Can Do

So like us, rats are natural students.   They can figure problems out fairly quickly, and adapt to changing conditions quickly (note different behaviors between a rural rat vs. a city rat), both skills needed for continued survival.  Rats are social creatures like we are, become attached to others, like we do, they take care of sick or injured rats, like we would take care of one another, they have highly complex communication abilities, some above the human range of hearing; they can show empathy and love, and bond quickly with humans and are popular as domesticated pets.  Rats can laugh.  Rats can also recognize when another rat does it a favor, and will reciprocate the favor.   This type of behavior, called direct reciprocation, is a first in the animal kingdom. Only rats perform this behavior.   They can learn to avoid certain kinds of rat poisons and even learn how to spring cheaply made traps to free themselves or another rat in distress.

Interestingly enough, rats also succumb to peer pressure, like we do.   If they are in the company of other rats who are eating food that really tastes bad to them, they want to conform so badly that they will eat what the other rats are eating.  Rats are worshipped as the agents of Lord Ganesh. There are temples to them where they are fed grain and milk.   Rats, unlike humans, are more prone to learn an optimal strategy and stick to it.  Humans, on the other hand, tend to second-guess themselves and make mistakes because of self-doubt.  Rats who were given an option to “opt out” of a test did so, demonstrating self-awareness.    For a scientific assessment of rat intelligence as compared to humans and other mammals (note:  lots of algorithms for the mathematically minded), click here.

Clearly, the quote “Build a better mousetrap and the world will beat a path to your door,” has relevance in light of how intelligent rats (and mice) can be.   It seems that building a better mouse, or rat trap, merely results in smarter rats and mice.  To see how scientists are manipulating a single gene to build smarter mice in the quest to find better treatments for dementia in humans, click here.

Just to place the cat amongst the pigeons, please review this short-detailed educational video from National Geographic See How Easily a Rat Can Wriggle Up Your Toilet 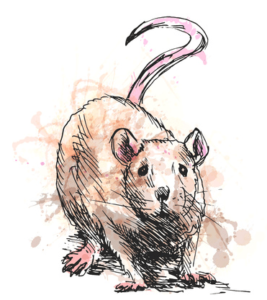 now, we simply have to create more ways to outwit our four-legged nemeses.  Their survival in the face of the most impossible of circumstances creates in this writer a grudging sort of respect for these little outlaws.  But for DNA and a chromosome or two, we humans could be rats!

In interested recommend reading our other  associated blog on this topic. 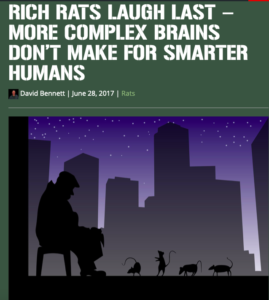 2 thoughts on “Rats: Smarter than Us and Not So Different.”