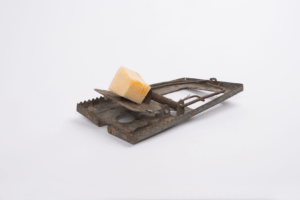 When you look around your house, you would not think that the plain rat trap would have anything interesting behind it.  You buy it, you set it and you forget about it until you hear it snap. Then you empty it and reset it and that’s it.   .A rat trap is like the paper clip or White Out or staplers.   You use them every day and you never wonder where they came from or who invented them. (Exactly who invented the paper clip is under debate. It is either William Middlebrook, who patented the paper clip machine in the US in 1899, or Johan Vaaler, a Norwegian who was granted a patent in Germany and the USA in 1901.   White Out was invented by Bette Nesmith Graham, mother of Mike Nesmith of the Monkees, and staplers were invented by Henry R Heyl in 1877). 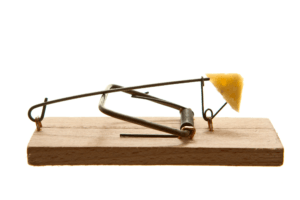 So what about the common spring loaded mousetrap, from which rat traps are adapted and descended?   It seems a bit of a competition was on in the United States and Great Britain between 1894 and 1898, insofar as the spring- loaded mousetrap is concerned, albeit the competitors did not know about one another.   Leeds, England, in 1894 was a quickly developing industrial center specializing in transport and commerce in the years of the Industrial Revolution. By 1890, Leeds had attained city status, and with factories and people living in close conditions, there were rats.  Lots of rats.   Of course, rats were a problem everywhere, along with mice, and an ironmonger born and bred in Leeds by the name of James Henry Atkinson invented the wooden backed spring loaded mousetrap in England, called the “Little Nipper,” whose spring action speed  (38 thousandths of a second) has never  been bettered by various would-be inventors in subsequent improvements through over one hundred years.  However, not knowing that an American fellow by the name of William C. Hooker of Littitz, Pennsylvania under the name Victor Traps (Many are familiar with this brand—it’s the cheap spring loaded wooden trap with the little bait plate on the spring with the big red “V” on it that you get by tens at the hardware store or Wal-Mart!)  had done the same thing in 1894, Atkinson made an improvement on his mousetrap that the American one didn’t have—and that is the treadle activated trigger which the mouse steps on, thus springing the trap. 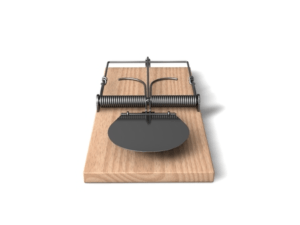 He later put a bait mechanism on his trap that sprung the trap when the mouse pulled on the bait. Atkinson sold his patent to Proctor, the company that has been making the “Little Nipper” ever since for 1,000 pounds in 1913.  The “Little Nipper” spring-loaded mousetrap, with its simple design, has not been bettered in speed or reliability in the over one hundred years since it has been invented and still captures 60 percent of the British market in mousetraps. 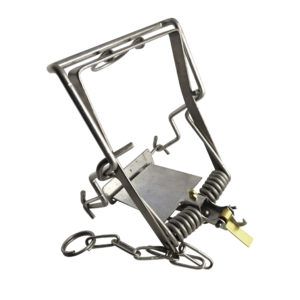 The Fenn trap which we market is a spring loaded trap invented by Alan Albert Fenn, born in 1918 in Wood Dalling, Norfolk England, who patented it around 1960.   It has been developed further in four stages to become the Mark 4 which is still used today. A Mark 6 version is used for rabbits and mink.  Review this video set up and spring action for the Fenn Trap Mark4

In America, the race for the better mousetrap was on.  Remember Mr. Hooker?  Modifications on his trap were made by John Mast in 1899, who had the idea of putting a safety on the trap so human fingers wouldn’t get broken or snapped in them, and since then, the US Patent Office has issued over 4,400 patents on mousetraps alone, however; only 20 of them have ever made any money.     The Patent Office gets about 20 new applications for patents for mousetraps annually, and has been granting about a dozen a year.

There’s a reason why mouse traps are still used and have not gone the way of the dinosaur.   While Warfarin may be effective, rats and mice are building up immunity to it.   No rat or mouse will ever develop an immunity to the lethal snap rat trap or snap jawed, spring-loaded mouse trap.

So next time you pull out your little Victor mousetrap, or use one of our artillery- industrialized strength Fenn traps, you will be holding a piece of history!