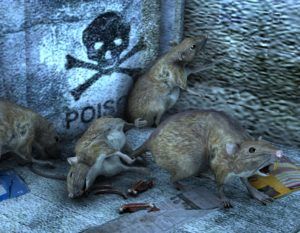 Killing rats is considered a necessity that nobody disagrees with.  Rats carry diseases that affect humans, and everyone can agree that rat infestations must be brought under control for the threat that it poses to public health. The methods for killing them however, is a matter of controversy, and also a question of profit for their manufacturers, and convenience for those who use them.  Lay down the poison, the rat eats it, and crawls off somewhere to die. No need to take them out of a trap.  Easy.

More happens than the rat dying, and this is the collateral damage that is not considered.  For example, the average person notices droppings in the house.   They conclude they have mice or rats.   They go to the local hardware store, or big box store, by a box of D-Con or TomCat, put the poison down in the house, and after a time, no more droppings.  No more rodents.   Problem solved.  There is a darker story unfolding after the rat eats the poison, however, which is often flavored like fish or peanut butter, which isn’t just yummy to the rats. The peanut butter flavor can also be eaten by our pets and our children with horrifying results, for there are no antidotes for most rat poisons.

A homeowner, who has discovered they have a rodent problem, goes out and buy rat poison and lays it down in the basement and around the foundation outside. Birds land and discover the rat poison and begin eating and fly off, eventually dropping dead in the woods, to be eaten by other birds or foxes and other predators, which eventually sicken and die.  Eventually the intended target, the rat eats the poison.  The poison, which is either an anti-coagulant (D-Con) or a neurotoxin (Tomcat XI), does not act immediately and can take anywhere from 2 hours or more to kill the rat. The rat has time to eat a lot of poison, and wander around, and now becomes lethal to pets and natural predators who find the body and eat it.   Then the predator or pet dies, and are eaten by others or left to decompose, allowing the toxins to permeate the soil.  It rains, and the poisons are leached into the ground or the water table. Imagine that scenario playing out every day in thousands of cities, and rural areas in North America, and now you can begin to see that this issue is just the tip of the iceberg of the harmfulness of rat poisons.    According to Wild California, “Dr. Gabriel Mourad, an ecologist, found that almost 80 percent of fishers, a near-endangered member of the weasel family that live in some of the most remote forests in California, were found dead between 2006 and 2011 had been exposed to high levels of SGARs. He and his colleagues are concerned about how rodenticides are affecting the entire forest food chain, from rodents to carnivores like martens, spotted owls, and the Sierra Nevada red fox.”   Wild California and Raptors Are The Solution (RATS) advocate building barn owl boxes and attracting natural predators to counteract rat infestations.  Click here for a comprehensive list of rat poisons still being sold over the counter RATS has compiled.

Rat poisons can be divided into two categories—first generation anticoagulants (FGARS) that work by blocking the manufacture of Vitamin K, which is the blood clotting agent.  These include poisons such as Warfarin and coumatetralyl. These generally have shorter elimination half lives and work over days, requiring the rat to eat a lot before they become effective. The rat eats these and dies by bleeding out.  Second generation rodenticides (SGARS) which include difenacoum, brodifacoum and bromethalin  (Tomcat XI), bromadiolone (D-Con),  supposed to kill the rat with a single dose, but these also take time to work, requiring the rat to eat more and accumulate more poison.   Dry ice is another measure that has been used in cities like Boston, which works to asphyxiate rats but was stopped there because it was not registered as a pesticide.

The EPA reports on its site the measures it has taken to ban pelletized forms of rat poison:

EPA has been working with manufacturers to ensure that safer rodenticide products are available to consumers for use in controlling rodents in the house:

The EPA advocates using tampering–proof bait stations.   We advocate using NO poisons and go one step further:  Poisons should NEVER be used, ever.   Seal cracks and holes in your home with steel wool mixed in the sealant to prevent rats from chewing through the sealant to get into your home. . Remove firewood far away from your home to avoid nesting rodents gaining closer access to your home.  Remove debris and garbage cans close to your home to prevent rodents nesting in it. Our traps have ZERO environmental collateral damage. The Industrialized Mark IV Humane Fenn Trap is designed to set in an enclosure, either man-made or  natural tunnel which protects children, domestic animals and wildlife from being harmed. We recommend working with your building management, local public health department and pest control department, or private pest control companies as applicable. We can work with them as a resource for knowledge and deploy an eco-friendly, humane, safe, non-toxic rodent elimination method.  Rather than waiting for government intervention, we believe that everyone can take steps to protect our children, pets, wildlife and the environment, and that individual action, with city governments setting the good example by using traps rather than poisons, create a movement that will make the use of poisons obsolete and create a better, safer world for humans and the animals that enrich our lives and the environment around us.