Irony is more noticeable the older we become, we have our share on the home

A rat has been hanging around the bird feeder all winter, a cunning, shrewd animal has avoided getting caught, defied both Sam the dog and I with random brazen appearances, insinuating “come on boys, you have to be astute to outwit me”
Set up the Fenn MK4, artillery strength trap in both cage and artificial tunnel to protect none target animals. Modified the entrances to the artificial tunnels to both cage and box housing the MK4 Fenn trap, making them smaller, so squirrels would not go in, to no avail, couple of them managed to get in, meeting a swift demise.

Understanding Rats feel secure in a pipe or tunnel, modified the wooden 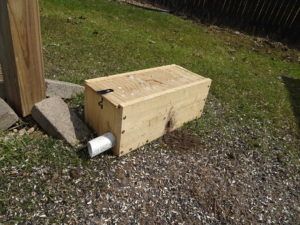 plate of his Fenn traps, preventing the target animal from sensing the difference in environment to fully commit. Also learned from discussion at Wildlife control event in Syracuse that Rats like soft material, for example tissues etc. for nesting purposes, incorporated this knowledge and added insulation to the bottom of the box and stuck a strip to the plate on the Fenn Trap.
The Rat was eating the bird seed, so sprinkled some inside the box and in the PVC tubes each end. The box was in place for 10 days, we had some cold 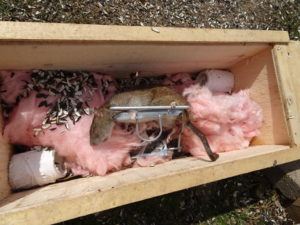 weather, did not see the Rat for some time, on couple of occasions, spotted him around the feeder and box, although to circumspect and to go in.
Today the Rat went in, perhaps as the box has been there for 10 days, it became familiar with, caught it finally. 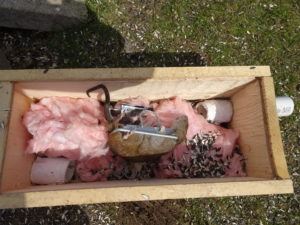 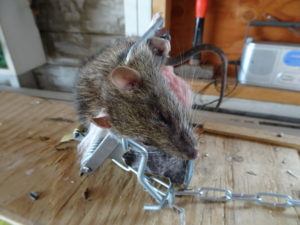 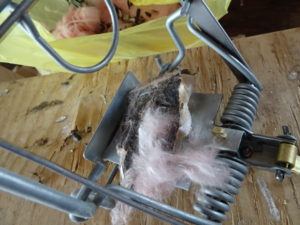 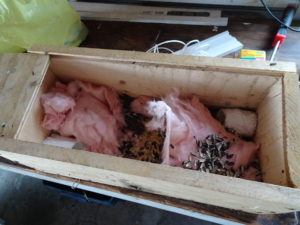