On the West Coast, there is a man and his dogs.  They aren’t just any dogs. They are 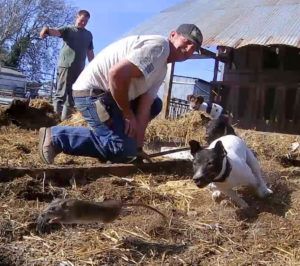 athletes. They are the Lance Armstrongs of the canine world. This hardened terrier bunch has a mission in life –a job—like all dogs do,that they are passionate about. They’d have to be since they must endure rat bites and rat fights. These Rockys of the canine world hunt and help controls rats.   JReed has the only pack on the West Coast (or the whole US for that matter), whose focus is agricultural.   They go to farms, lots of farms. Large commercial farms, small hobby farms, and organic farms.  Organic farms cannot use rodenticides or they will lose their organic certification—which makes sense.  So, they call JReed and his Mongrol Hoard to help control their rat infestations! 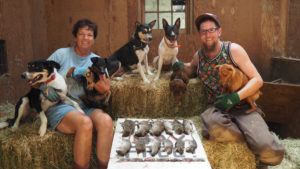 JReed is a sheep shearer by trade.   He does ratting on the side, and says he’s not in it for the money, but for the promotion of positive rat management techniques that don’t involve pesticide on farms. Do you want to hire JReed and his pack?  You can do so, through his website!  According to his website, “We offer a non-toxic and effective option for organic farms where rat poison is illegal and for other small farms and homesteads who want to keep noxious chemicals out of the food chain. Rat poison kills slowly and painfully over days and is toxic to other levels of the food chain. Rat eradication with dogs is in contrast, quick, efficient, humane and leaves no trace. “ Did you look at the title of this article twice and think that the British Rat Trap’s writer misspelled “Mongrol?” No, that’s not what happened.  JReed explains on his website: “A note about our name: Our kennel name is Jreed and his Mongrol Hoard of Rascally 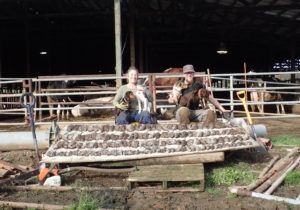 Rat Wranglers and this spelling is correct and intentional. “The Mongrol Hoard” as they are affectionately called, is an entendre; “Mongrel” being a less-than-affectionate term used for dogs of unknown descent, and “Mongol” being a fearsome Asian warrior. “Mongrol” is a modern slang for a person of poor attitude. The Mongol Horde is well known, but although I use multiple dogs my “Hoard” of treasured bad attitudes is very unique.”

We have written many articles about the collateral damage of rodenticides on eagles, mountain lions in California, that were found to have as many as 5 rodenticides in their bodies from eating prey who had either eaten a poisoned rat or had directly actually eaten a  poisoned rat (most rodenticides take 5 days to kill a rat after ingestion, and do the same to apex predators who eat them).  Using the dogs is actually 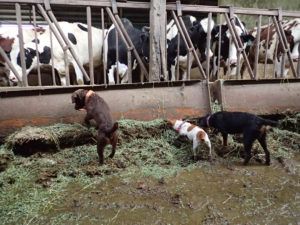 more humane than using rodenticides, because of the time (5 days or more) it takes rat poison to kill the rat. Professional pest control, he says, is all about training about how to handle poisons—it isn’t about training to have knowledge of rats or their habits.  Poison kills slowly. The dogs kill the rat immediately.  Rodenticides are dangerous to the environment, water, wildlife and animals (including domesticated dogs and cats and children, JReed says, because they are used improperly.  Most buy rodenticides and spread them wherever—usually in places there are no rats, just because they’ve seen rat scat—or in places easily accessible by birds and pets.   It is clear there is an incredible holistic advantage to using natural predators to control rats which spread diseases to humans and other animals. 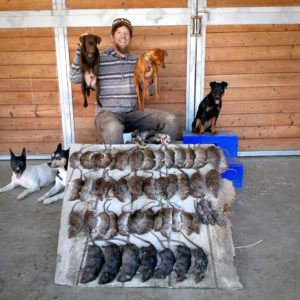 What does it take to be part of the Mongrol Hoard?   It takes knowledge of rats, where they live, what they like, what they don’t like.   It takes knowledge of dogs. Not every dog or dog breed is disposed to the hard work of ratting.  It takes knowledge of farms—often folks think they have a bigger rat problem than they actually do.  Sometimes folks don’t realize their own farming practices are encouraging rat issues.   So JReed will actually go to farms and where he sees problems, he wreaks havoc. He will overturn pallet piles to flush the rats out.  He will tell the farmer how to get rid of these junk piles. He will rip apart woodpiles and flush out rats and, in the meantime, while all this disorderliness is going on, the farm is being cleaned up.  JReed’s focus is educating farmers on steps they can take to control their rat issues.   A farm will always have rats.  The rats will never be exterminated. But the farmer can clean up grain spills, and clean up the place, and repair outbuildings so rats can’t get in to any of those places.

All hunts start with an inquiry which includes the following–how many rats the farmer has seen or if there are only droppings.  Reed wants to make sure there’s a problem before he takes the dogs out.  Then, he’ll go to the farm and walk it and have the farmer show him where he is seeing the rats.  After all this, if there is a big problem, he lets the dogs loose and the dogs find the rats—and dispatch them with the cunning, speed and ruthlessness of Genghis Khan. The dogs will generally kill 8-20 rats on a small farm, and Reed says if the dogs kill more than 50, then it’s been a pretty great day.  If he takes the dogs to a commercial farming operation where there’s a lot of grain, there could be 1 to 300 rats.  It’s okay though.  The dogs live for clearing the Norway rats out!

The Mongrol Hoard is a working kennel and does not breed dogs for sale.  Training a dog 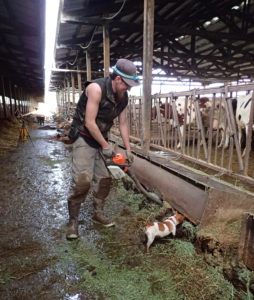 to rat is a complex process, and Jreed’s dogs would be lot to handle for the average dog owner.   He will occasionally help farmers locate and help a farmer train ratting dogs for their own farms.  Mostly, he educates people about prevention and rodenticide free rat management practices.   He educates people about ratting dogs, rat behavior and biology.  (Click the link to see a great introductory video about the way Reed and his dogs work).   Reed has picked up a wealth of knowledge about rats and their biology and habits from years of experience. 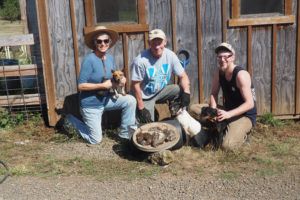 JReed says terriers are best because they have been historically bred for ratting.   A ratting dog needs to be small to fit in tight places, she needs to be fast, and she needs to find rats consistently. Reed says the dog needs to be a stone-cold killer who doesn’t care about being bitten by the rat.   He says either the dog will have an interest in ratting, or they won’t.   As Dwight D Eisenhower once said,
“What counts is not necessarily the size of the dog in the fight; it’s the size of the fight in the dog.”

It’s a dangerous job for the dog.  Farms are dangerous places for humans and dogs alike. 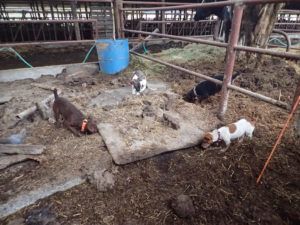 Cows can kick them and hurt them, sometimes fatally.   There’s always something on a farm that can fall and harm humans or dogs.   There are diseases and bacteria from manure and naturally occurring in the environment depending on the nature of the farm operation that can make dogs sick.  You can see that it’s not an easy job.   A dog that loves this job is a ratter at heart. That’s the kind of dog it takes!

Got rats on your farm?  No matter where you live in the United States, give JReed a shout via his website!   It was a real pleasure to spend some time with JReed, and we wish him and his Mongrol Hoard the best of luck in their ratting!

We wish to thank J Reed, his crew, the dogs and are inspired by the service they provide. we are aligned on all the key principles. Appreciate time taken to share knowledge, photo images in this wildlife pest control for agricultural industry approach