The rats of the Upper West Side of New York City aren’t just bold—they’re absolutely brazen.  And like the celebrities who live there, these rats are loving the publicity—the story is hitting nearly every paper and blog in NYC, even the mighty Wall Street Journal–and blogs around the nation are picking up the story.  Because running about is not good enough for these fancy rats—they’re rats of the Uber generation, and their transportation of choice is baby strollers—and they sit companionably by the baby while screams reverberate around the neighborhood by the mothers conducting the strollers down the street.   While Mayor DeBlasio is waging war against rats in lower Manhattan, the rats of the Upper West Side are living higher than Carrie Bradshaw in Bloomingdale’s.   (You don’t think those strollers are cheap Gracos, do you?  No.  These are Silver Cross Kensington strollers.  Maybe even Versace Plus.  It is the Upper West Side, after all).

Nobody can decide how to handle them.   Nobody wants to use poisons, because they are afraid of killing the resident neighborhood hawks.  Mayor DeBlasio wants to use mesh covered trash cans, which is a big part of his $3.2 million-dollar Neighborhood Rat Reduction Plan, to discourage the rats’ food supply.   Assemblywoman Linda Rosenthal favors the direct, lethal approach by laying down dry ice.  According to the Gothamist, “With tensions escalating, the assemblywoman is urging the city to fill the playgrounds’ rat burrows with dry ice—a method of rodent eradication recently recognized by the EPA, but not yet approved by the state Department of Environmental Conservation. “It’s not like the rat is choking,” the assemblywoman promises. “They just go to sleep and don’t get up. It’s effective, it’s cheap, it’s what we need.”

Until a consensus is reached about how to eradicate them, the shouts of residents and city officials are getting louder.  When will enough be enough?   We’ve already done more rat stories about New York City than any other city in the nation in just the last three weeks.  An environmentally freindly  solution is readily at hand from the British Rat Trap Company -we’re ready and willing to help New York City formulate a solution incorporating our Fenn traps so rats will give up and take the Yellow Cab to heaven like proper NYC rats should do, leaving baby strollers to—well—the babies. 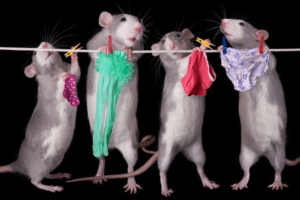