In this week’s edition, we talk some more about rodent control in urban public housing—this time, about what has gone all wrong in rural public housing. California is putting all of its effort in eradicating the swamp rat which is taking over the state.

Last week’s quiz question: Which rat was host for the plague – carrying flea in medieval times?

Answer: Fleas carried by black rat get the blame, but brown rats can carry fleas that carry plague as well.

This week’s quiz question: We know they can be pests but how do squirrels help the environment? 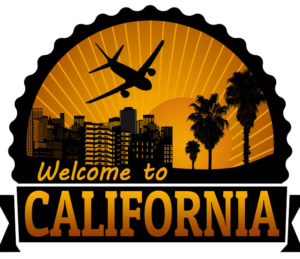 The nutria, or giant swamp rat, famous in Louisiana, is taking over

California!   They reproduce  like crazy, and get up to 20 pounds in weight.  Animals.net goes on:

California has decided they aren’t taking it anymore and have gone into overdrive in their attempts to eradicate the animal.   They carry pathogens that pose a public safety risk, and The New York Post reports the state of California is worried that they will infiltrate the Sacramento-San Joaquin River Delta which would threaten agriculture and public drinking water supplies.

“The delta is the “heartbeat of California’s water infrastructure,” according to Peter Tira, spokesman for the state’s Department of Fish and Wildlife. It contains a network of more than 1,000 miles of canals and levees that protect the area from flooding, provide drinking water to millions of Californians and irrigate the lush agricultural region.”  They’re using cage traps submerged in water baited with succulent treats.  They’re shooting them outright. And now, with 10 million extra dollars, they’re going to surgically sterilize them and outfit them with radio collars which will make the nutria spies leading Fish and Wildlife straight to their families and friends to meet the same fate.  They’re also going to used nutria sniffing dogs to flush out every possible nutria.    However, some complain that this will cost far more than the 10 million allocated.  California Democrat Josh Harder made his point when he brought in a dead nutria to a congressional hearing this week (interesting!) as he sought another 7 million dollars in eradication efforts. Fox News reports: “Harder said California could be plagued with 250,000 swamp rats in five years if no action is taken. “Nutria can destroy crops. They destroy almond trees as well as irrigation canals,” he testified during a congressional hearing this week. “They can even cause flooding because they burrow into our water control systems.”    As we watch the state of California fight against giant rats and regular rats we repeat again—we can help (maybe with the regular rat problem moreso than the nutria problem)!

We’ve been talking a lot about exclusion in urban public housing lately and this article, which focuses on 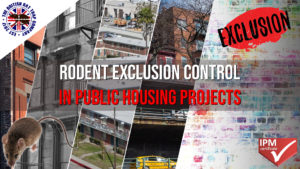 rural public housing (lesser known by the public and funded by the USDA instead of HUD) demonstrates why.   NBCNews.com reports that not only has the USDA failed to adequately upkeep 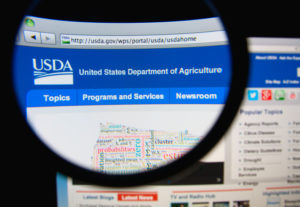 public housing in Florida for farm workers, but that the government may not fix it at all due to moves being made to eliminate federal funding for it.  Not only are buildings rotting from broken pipes and sewer issues but roaches, rats and mold are exacerbating allergies in children, making people sick from pathogens carried by them.   “The Okeechobee Center is part of a little-known government initiative [Depression era housing circa 1930s] that houses more than 400,000 low-income families in about 13,000 privately owned properties across rural America, from Appalachia and the Mississippi Delta to California’s Central Valley. Built with federal loans, the properties are 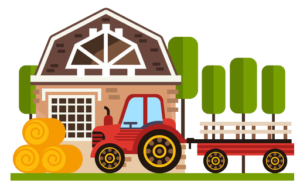 intended to address a shortage of quality, affordable housing in rural areas, with some specifically dedicated to agricultural workers.  Unlike public housing complexes in metropolitan areas, which are supervised by the Department of Housing and Urban Development, the rural properties are overseen by the USDA — an agency best known for supporting food and farms, not affordable housing.  Amid staffing cuts and with limited resources to fix aging buildings, the USDA has pared back its housing inspection protocol, provides little public information about properties’ physical conditions and can be slow to take enforcement action when housing fails to meet federal standards, NBC News found in an investigation based on USDA documents, including inspection records and emails; government watchdog reports; and interviews with tenants, local officials and a dozen current and former housing officials.”     The problem has been ongoing since the 1960s when journalist Edward R. Murrow focused on the issue, showing children crammed on beds, with sheets chewed apart by rats.  The good news is, since this initial report, the USDA is making investments in rural public projects in 41 states, which includes “transitional housing” but it is not clear if this funding covers rural public housing projects.  Albany Herald explains: “USDA is making the investments and has additional funding available through the Community Facilities Direct Loan Program. Interested parties should contact their USDA Rural Development state office for application and eligibility details. The 41 projects are in Arizona, Florida, Georgia, Iowa, Kentucky, Maine, Missouri, Montana, Nebraska, New York, North Carolina, Ohio, Pennsylvania, South Dakota, Tennessee, Virginia and Washington. More than 100 types of projects are eligible for community facilities program funding. Eligible applicants include municipalities, public bodies, nonprofit organizations and federally recognized Native American tribes. Projects must be in rural areas with a population of 20,000 or less. USDA will make additional funding announcements in the coming weeks. Congress appropriated $2.8 billion for community facilities direct loans and grants in Fiscal Year 2019.”

The RodeXitTM proofing strips are: 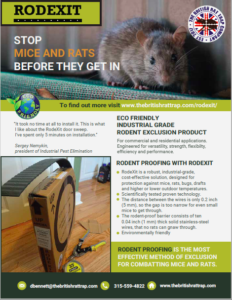 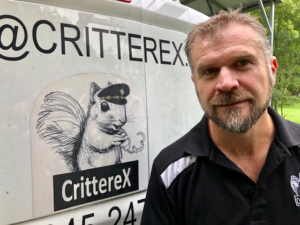 “The RodeXit door sweep is now my first choice.“ 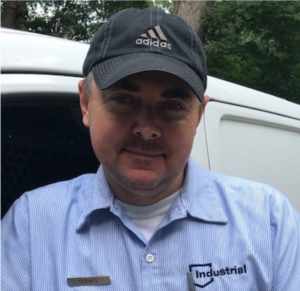 The RodeXitTM proofing strips are made of heavy-duty SantopreneTM with a gnaw secure barrier of 10 close-set 0.4 in. (1 mm) thick solid stainless-steel wire:

The RodeXitTM proofing strips can repel even sustained rat or mice attacks. 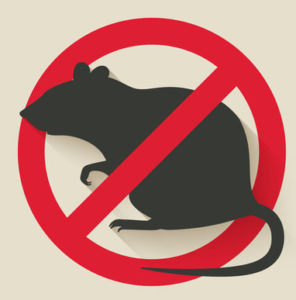 Let us know if attending PestWorld2019 – Expand knowledge about exclusion.

Meet Bjorn Von Ryberg co-founder and co- inventor of RodeXit Proofing Strips, a wealth of knowledge on effective innovative solution for exclusion of Mice and Rats.