They Exist! The Enigmatic Mountain Beaver 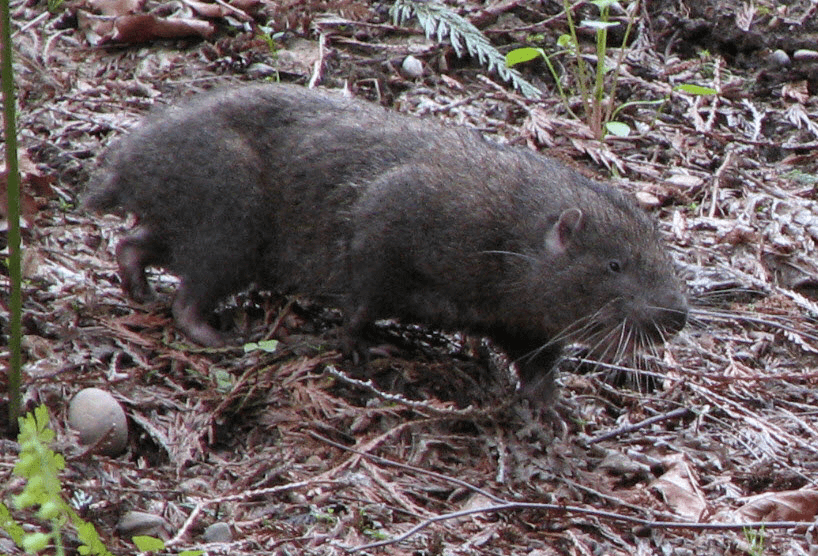 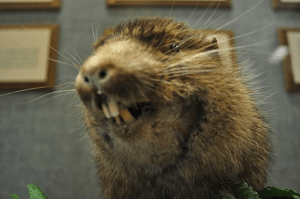 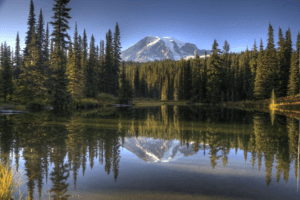 Along with Bigfoot, the mountain beaver is at home in the mysterious Pacific Northwest.  Welcome to another strange, wonderful, mystical journey into the world of rodents. Welcome to the Ratastic Zone….

What They Are: We Have No Idea

A mountain beaver isn’t a beaver.   It’s a giant rodent that kind of looks like the result of a bad marriage between a mole and a rat.   Taxonomists say they are the world’s most primitive species. They can get to be up to a foot long, but lucky for us they only eat plants—not us.   They are the only surviving member of their biological family and are a living fossil, having remained essentially unchanged for over 40,000 years.  They’re called beavers because they eat tree bark like a beaver but unlike beavers, these guys are expert tree climbers and expert at hiding.   The Seattle Times describes how enigmatic they really are:

“Over the years, it’s often been mistaken for other animals. In Oregon, likely because someone thought it was the animal making a particular sound, it was labeled a “boomer.” Others call it a “whistler.” Animal researchers say it chatters, hisses and coughs, but doesn’t boom or whistle.” 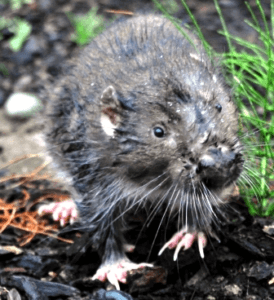 We mentioned they are good at hiding.  They’re so good at hiding in fact, that most people don’t even know they exist, and have expressed doubt as to whether they actually do exist.

Mountain beavers are burrowing animals.  They like putting their burrows where vegetation is dense, and their tunnels radiate out from the main burrow.   According to the Washington Department of Fish and Wildlife, their habitat ranges from coastal and mountain habitats in southern British Columbia down to western Washington, western Oregon and south to California. Although, in line with their enigmatic selves, they mostly don’t live in the mountains.  They mostly live in the lowlands. You won’t know they are there until the trees near your house fall down.  And by then, it will be too late for your trees.

What They Eat and How They Live

According to the Internet Center for Wildlife Damage Management, mountain beavers really like ferns—bracken ferns and sword fern.  It is their preferred food. Douglas fir, hemlock, western red cedar, and red alder are favorite species of trees it likes to eat if it can’t get ferns.  They have  inefficient kidneys so the damp climate of the Pacific Northwest suits them well because they need to drink a lot of water. ICWDM continues:

“Most feeding occurs above ground within 50 feet (15.2 m) of burrows, although occasionally mountain beavers may travel several 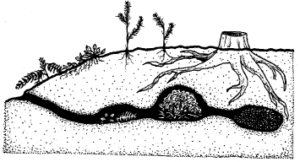 hundred feet from burrows. They routinely climb shrubs and trees 8 feet (2.4 m) or higher to cut off branches up to 3/4 inch (1.9 cm) in diameter, where they leave cut stubs of branches on trees. Mountain beavers also girdle the base of tree stems and will feed on stems up to 6 inches (15 cm) in diameter, as well as the root systems of large trees. The bark is found in the stomach contents of animals collected in midwinter. Woody stems are often girdled and cut into about 6-inch (15-cm) lengths. Food and/or nest items are often stacked at burrow entrances…but are sometimes carried directly to food caches or nests. Plant material is occasionally eaten outside the burrow but is usually eaten at the food cache, in nests, or in the burrow.”  They are solitary creatures and don’t even get along with their own kind except long enough to have a quickie so they can reproduce from February to April .   It’s slam bam, thank you ma’am, and then they’re gone.  They usually only have 2-4 young after a 30-day gestation period.  So much for romance.

Who likes to eat mountain beavers?

Oh yeah.  You’ll never find their droppings because…well…they like to eat their own feces. And they poop inside their burrows, not outside.   If that doesn’t put you off your dinner, I don’t know what will.

Why They Are Considered a Pest and Techniques of Control 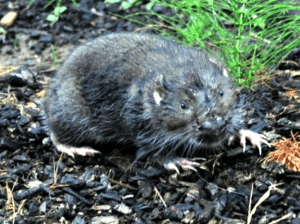 Mountain beavers like getting down with their bad selves, and when I say bad selves, I mean it.  They can be mean little buggers.   They can deliver a nasty bite and they have these claws resembling Eddie Krueger’s hands that can slice and dice with the best chefs out there.  You don’t want them slicing and dicing you so it is recommended you don’t handle them if they get caught in a trap you’ve set.   But all the meanness they are capable of isn’t what makes them a pest.   What makes them a pest is that they are destructive to new plantings of trees and to trees generally.   They like to girdle trees, and either bite straight through small tree roots or girdle tree roots, and this isn’t good for the tree, resulting in the tree dying which affects the habitats of other animals in a detrimental way.   How much damage do they do to commercial reforestation and natural forests?  A lot.   ICWDM states that over 300,000 acres (120,000 ha) of commercial coniferous tree species in western Washington and Oregon have been destroyed by the ghostlike creatures.

They are wily creatures and even Lewis and Clark couldn’t manage to trap one alive when they discovered the local Chinook population in Oregon made fur robes out of them.  So any attempts at control are really a battle of wits with an animal who isn’t intimidated by much of anything, grouchy and able to outwit you.   They are especially sensitive to vibrations, so they can hear you coming a mile away.   Bu there are a variety of direct and passive techniques you can use to protect your trees and control the damage of your pugnacious rodent neighbor.  ICWDM says:

Forget about fumigants—their burrows are too well ventilated for that, and laying poisons don’t really work either due to their suspicious nature and only kills other animals that might eat the bait.

As you can see, our furry, grouchy little friend is quite adept at what he does.   It is clear why the species has survived for 40,000 years.

We would like to acknowledge and thank John Regan of   Northwest Wildlife Online   for contributing significantly to this article, granting permission for us to use the rare images of the Mountain Beaver.  Highly recommend visiting his site, which contains abundant, succinctly articulated, topical, academic and educational articles.